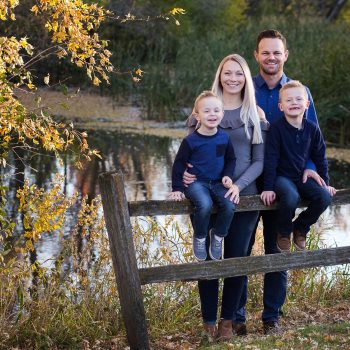 My wife and I reside in Tea South Dakota, just outside of Sioux Falls, with our 2 boys, Sawyer (9) and Wesley (6).  Both of our boys were recently diagnosed with Duchenne and they both carry an exon duplication of 44 within their DMD gene.  There is nothing that can prepare you for the devastation, shock and shear despair that a fatal diagnosis brings.  Timelines, days and even specific times within a day are moments that are forever etched within your heart and mind when dealing with something that is so extremely heavy.

Ever since Sawyer was a baby we found his movement to be a bit stiff and awkward. His milestones were a bit delayed but with him being a preemie we felt like he was doing well and we were told the same.  As he grew he presented some weakness but nothing that raised any alarms. We made appointments over the years to check with doctors about his hips as they seemed tight when he ran and walked. He was examined and the response was that he was fine and that he just moves a bit differently. In the summer of 2019, when he was 7, we were really noticing a difference between him and other kids his age. As hard as he tried, he was unable to keep up with them. So that fall we took him to be examined again and we pushed for Physical Therapy even though they could find nothing wrong with him. His hips were not tight, he appeared to have no issues.

Physical Therapy started in August 2019, once a week. Our PT noticed right away that he was lacking core strength and was not using the correct muscles for his movement. For example, when standing he did not use his core or much of his leg muscles to stand. He instead pushed off with his hands using his arm strength instead. So we focused on building up those core muscles. It was difficult for him and he worked hard every week with daily exercises in between. After a couple months, his Physical Therapist was concerned that he wasn’t showing enough improvement and sent us to a Physiatrist to study his movement and see what else we should be doing to help him. She did a thorough assessment with him and didn’t see anything to be concerned about. She said to continue Physical Therapy and come back in 6 months to check him again. The next day we got a call from her. She said she felt like she was missing something and it dawned on her that he has a lot of qualities that line up with Muscular Dystrophy. She wanted to have a CK test run on him (blood draw) to see if his creatinine levels were high which would indicate whether or not his muscles were breaking down. November 1st we swung by the clinic for a blood draw. The next morning the test was available in his MyChart. His CK level was extremely high. CK norm is 65-170u/l. His was over 51,000. We were in shock. It was Saturday. We couldn’t talk to our doctor until Monday. It was the longest weekend of our life. We knew this was bad but we needed someone to verify what we were seeing.

Monday, November 4, 2019-Sawyer’s 8th Birthday we get the call. The Physiatrist believes he has muscular dystrophy and his muscles are breaking down at an alarming rate. But we still need confirmation from a neurologist. We had to wait almost a month for that appointment. The day before Thanksgiving we take him to the Neurologist. She too believes he has muscular dystrophy but they need to confirm with genetic testing. Another blood draw and a very long 2 weeks wait. December 13. It has been confirmed that Sawyer has Muscular Dystrophy, a devastating irreversible muscle wasting disease that has no cure.

After Sawyer was diagnosed we had to wait until January for him to have his full day of baseline studies, exams and patient education etc. The next step was also to find out how he got the disease and if anyone else in the family has it. Muscular Dystrophy is almost always passed from mother to son. (Fathers cannot pass it on because they only contribute their Y chromosome to their child and the mother an X chromosome. MD is only found in the X chromosome.) Each time a carrier mother has a son, there is a 50% chance that he will be affected. Each time a carrier woman has a daughter, there is a 50% chance that she will be a carrier or a manifesting carrier. So we were very puzzled as to how could this be?! We don’t have any family history of MD. They said it likely was passed down from a distant relative. They were concerned that JeanAnn was a carrier and carriers can also have muscle weakness and heart problems later in life. They had JeanAnn do a genetic test to see if the same gene mutation existed.  Another wait.

In the meantime they wanted Wesley to run a CK test to make sure his muscle isn’t breaking down (which could mean he has MD too).  We soon found out that JeanAnn was not a carrier. So Sawyer’s MD was not genetically passed down like they assumed but was a rare spontaneous case.  We were told before Sawyer was born, he happened to have a mutation during early development.

We then got Wesley’s CK test results. We were in shock. It was elevated. CK norm is 65-170u/l. His was over 5,000. Considerably lower than Sawyers 51,000 but still way too high and his muscles are also breaking down.  Wesley had no obvious symptoms. Other than being a preemie he has had no issues. He appeared to be a perfectly normal healthy boy. We talked to our genetic counselor and she was surprised and puzzled as well. She thought perhaps he had a different issue because the odds of having 2 spontaneous MD children is extremely rare/almost impossible.

We ran Wesley’s genetic test to see what it could tell us and experienced another long wait. Now it’s the middle of February, 2020 and we get the call again… Wesley has Muscular Dystrophy too. Wesley has the exact same gene mutation that Sawyer has. The genetic counselor explained that JeanAnn has a Germline Mosaic which means that when JeanAnn was developing and her eggs were being made and duplicating there was a fluke and some if not all her eggs carried the exact same mutation. This would mean that some if not all of our children would be born with it. So it wasn’t genetically passed down, it was a fluke within the development of eggs. There was no way to know about it until having children.

Immediately trying to grasp for hope, staying positive and learning as much as possible was something that came natural for us.  Being proactive and attempting to do whatever you can for those you love is crucial.  We have extremely hard days and we have days that bring endless amounts of joy.  How you react to adversity defines you, not the adversity itself.  We truly believe that everything happens for a reason and our Faith, Love, and Hope guide our actions to a brighter future.

What They Don't Tell You About Duchenne

Q&A with Elijah Stacy, author of “A Small If,” a memoir on living with Duchenne muscular dystrophy