Hope on the horizon 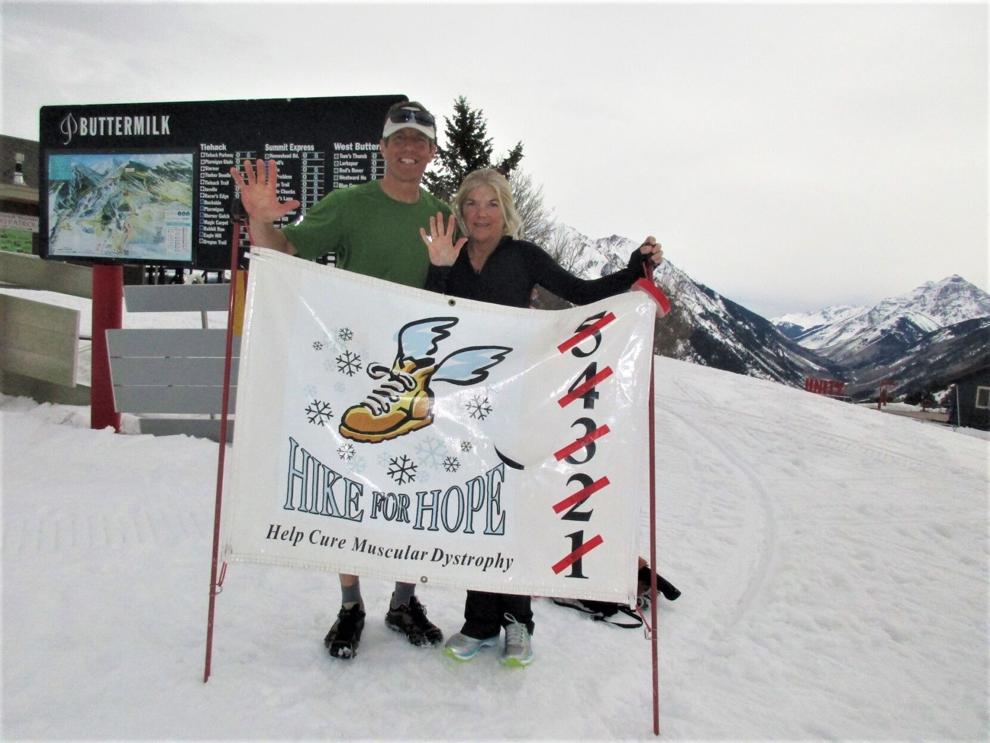 On Dec. 5, 2003, Ian Sharp was diagnosed with Becker muscular dystrophy. He was only 10 years old.

From that day on, the Sharps, a local Aspen family, have been on a desperate search to find a cure for their son.

“Since the day he was diagnosed, we decided we would live as best as we could for Ian, and he’s been incredibly strong and hopeful,” Ian’s mom, Carole Sharp, said in a recent interview. “People will say to him, ‘Oh you’re lucky, you get to grow up and live in Aspen,’ but he’s not. He’s living through this invisible disease — this terrible, terrible disease.”

Becker muscular dystrophy, or BMD, is one of more than 30 genetic diseases falling under the muscular dystrophy group. It’s an inherited condition that causes progressive weakness and wasting of the skeletal and cardiac muscles, according to the National Institutes of Health.

BMD primarily occurs in males, often affecting the legs and pelvis. Some of the symptoms include difficulty in walking, difficulty with muscle skills, frequent fatigue, loss of balance and coordination, and problems breathing.

Soon after Ian was diagnosed, the Sharp family, including Ian’s dad Bob and brother Ty, started a community fundraising event, “Hike For Hope,” an annual race up Buttermilk Mountain to raise money for research to help find a cure for MD and other rare genetic diseases.

“About five years ago, Ian came to me and was like, ‘You know, mom, I want to be able to hike up, to walk up, and I can’t,” Sharp said. “It was a nice community event for a long time, but the truth is, it’s in spite of Ian’s ability, so we reinvented it to more of a virtual fundraising event.”

From their community and national fundraising efforts, to supporting ongoing research and organizations, to countless consultations with various doctors and experts in the field, the Sharps have been on a strenuous journey.

“I do what I can do. We have our Facebook donation page, Hike For Hope foundation; I try to pass the word and keep pushing,” Sharp said. “But, I’ve honestly just been focused on living a life with my son.”

Eighteen years later, there is still no cure. Ian is now 28 years old, and there are no treatments for MD and most other rare diseases.

But a young man by the name of Rich Horgan is close to changing that narrative, becoming a beacon of hope for the Sharp family and many others across the country.

Horgan is the founder and president of Cure Rare Disease, a nonprofit biotech based out of Boston, Massachusetts. CRD is pioneering the rapid development of customized therapeutics for rare diseases.

The Orphan Drug Act of 1983 defined a rare disease as a condition that affects fewer than 200,000 people in the U.S. The term “orphan disease” came about because drug companies were not interested in adopting rare diseases to develop treatment.

While this Act has provided incentives for pharmaceutical manufacturers to develop new drugs to treat rare diseases, the “one-size-fits-all therapeutics” model still persists, leaving millions behind.

“Traditional drug development is really geared toward larger diseases, and a reason for that is the high development costs,” Horgan said last week. “For us, we’re focusing on a single patient’s individual genetic mutation.”

CRD’s custom drug development process, or customized therapeutics, relies on interdisciplinary collaboration between world-renowned researchers, drug manufacturers, clinicians and the best-available technologies to target and treat genetic typos with precision so that no patient is left behind.

“Over the last 18 years, we have become extremely familiar with the players in this field, and they just aren’t coming together,” Sharp said. “Rich finally stepped out of the box. He’s brought remarkable people under one roof, he’s working closely with the FDA, and his dedication and investment to provide a cure comes from what he’s seen himself.”

Horgan’s younger brother, Terry, has Duchenne muscular dystrophy, or DMD, the most common and severe type of MD, followed by BMD. During his time at Harvard Business School, Horgan started spearheading research and multidisciplinary collaboration to save his brother’s life.

Inspired by Dr. Timothy Yu’s groundbreaking work of developing a tailor-made treatment for a young girl suffering from the highly fatal Batten disease, Horgan came to understand the potential to rapidly create and test a drug designed for one person.

“Right now, we’re really focused on muscular dystrophies, targeted at fixing Terry’s mutation, but with the framework we’ve learned through this development, we’re working to take that medicine through the cycle so it’s completed in time to help the patients and families involved now,” Horgan said. “And we’ve had success, we’ve met with the FDA in a [pre-IND, or investigational new drug] meeting, and we’re now rounding the corner for my brother’s treatment.”

Cure Rare Disease was born in 2017. In a few short months from today, Terry Horgan will be the first person in the world to undergo a possible cure for MD. Ian and others are not far behind.

“This is an exciting time for not just my family and I, but for the other families who have joined us across the United States,” Horgan said. “Families come to us at different parts of their journeys, and all-in-all, around 50 families are currently involved in some way, shape or form.”

On track for treatment

The Sharps discovered Horgan and CRD a little less than a year ago during a Zoom call check-in with one of their respected doctors, Dr. Brian S. Tseng, who told them about recently seeing Horgan on “Good Morning America.”

Sharp reflected on the call, remembering how Tseng described “this kid with a business background — he’s remarkable — the work he’s doing, it’s scary but it’s remarkable.

“We got off Zoom and I contacted him immediately,” Sharp said. “I called them and told them Ian’s story and that we wanted to get involved, and they were like, ‘absolutely.’”

Sharp emphasized how it has not even been a year since they became involved with Horgan, and Ian is already in the pipeline to receive this customized therapy, on track to undergo treatment in two years.

“We’re all waiting for Terry to get his dose in the next few months, and once it gets approved and works, Ian and other kids are in line for treatment,” Sharp said. “So, this is far-reaching — it’s the future — and Rich’s whole premise of customized therapeutics is so crucial for treating people who have a rare disease.”

Ian recently entered the first phase of CRD’s model, enduring a muscle biopsy, which entails removing a piece of muscle from the thigh to be sent off and studied by experts in order to characterize and understand the individual genetic mutation — the “patient-in-a-dish stage,” as described by Horgan.

Horgan went on to sum up the entire development process, which is funded by grants, families and corporations for advancement. After establishing the patient cell line and testing therapeutic approaches to optimize efficacy, the genetic mutation is then tested with a mouse model. Once proven successful, the team meets with the FDA for the pre-IND meeting in order to manufacture the human-grade therapeutic before ultimately submitting the IND for FDA approval.

In Terry’s case, the CRD team discovered the potential of CRISPR/Cas9 (clustered regularly interspaced short palindromic repeats), a gene-editing technology that allows researchers to edit parts of the genome by removing, adding or changing sections of the DNA sequence, to restore the ability of the DMD gene to produce dystrophin.

This CRISPR/Cas9 system has proven to be successful in the mouse models of DMD, and research shows the promise of this technology to treat different types of MD, as well as other rare genetic diseases, such as cystic fibrosis, according to Muscular Dystrophy News.

“This CRISPR technology has been around for years, and they need to put it to test,” Sharp said. “And research is showing its promise for some of the other 7,000 rare diseases that exist, not just muscular dystrophy.”

The price of a coffee

In order to enhance and complete the development of CRISPR-based therapeutics and delivery systems, CRD launched a fundraising campaign this past September, called “Strive for Five.” By the end of this year, CRD sets out to raise $5 million — five dollars at a time.

Aligned with the organization’s founding principles and belief in the power of collaboration, the “Strive for Five” method works by a single person donating five dollars and then asking five friends to donate, who will then pass it on to five more people, until reaching their goal of five million dollars.

“The idea is that, for the price of a fancy coffee, we can have a million people donate to shift the knowledge,” Horgan said. “By having individual communities solve this fundraising mean, we can push research forward with families and their stories.”

As one of the involved and supporting families, Sharp mentioned how they’ve given around $100,000 to CRD through Hike For Hope and other outlets, and they’ll keep giving every year. Sharp has participated in the recent “Strive for Five” fundraiser, passing it along to friends and family in the Aspen community.

“I feel like people are always getting bombarded to give their money to different nonprofits or organizations, but the fact is, this is only five dollars,” Sharp said. “And what you’re helping with those five dollars is beyond incredible — it needs to happen.”

According to the CRD website, $5 million could enable the development of a new CRISPR system to address over 40 percent of the mutations amenable to editing, the completion of five CRISPR-based therapeutics and the creation of a novel technology to better deliver CRISPR throughout the body for patients who have a rare disease.

“Asking for five dollars is easy, even if everybody just gave one dollar, think of where we’d be,” Sharp said. “I just want to support Rich because his recipe is the future, I trust him implicitly and this fundraiser supports Cure Rare Disease’s amazing collaboration efforts and what they need to do to get it done.”’

‘This is the hope’

In addition to providing a cure, Horgan is passionate about harnessing the stories of the people and families coping with a rare disease. He explained his two-part mission, one part being to demystify what happens in drug development so that the average person can feel comfortable asking questions.

“The second is to bring that authentic perspective of what it’s like living with a rare disease or a disability and what it’s like to go through gene therapy to communities,” Horgan said. “By families sharing their personal viewpoints and experiences across communities around the country, and through conversations like the one we’re having now, we can push forward tangible change.”

“I really feel like Rich is putting it all together for this community, and we need to come together to do this,” Sharp said. “Rich is the future, he is the hope and I hope we see him provide a cure, stopping this awful disease in its tracks.”

Eighteen years ago, a young boy growing up in the active outdoor culture of a mountain town, who loved to ski, hike and play football and was always accompanying his athletic parents’ adventures, was faced with a battle that no person has ever won.

Today, this is destined to change.

“In the 18 years Ian’s been battling this disease, Rich has given Ian something to hang onto,” Sharp said. “This is the hope.”